These tiny mites (Sternostoma tracheacolum) infest the bird’s airways. Infected birds are generally lethargic, but the most obvious symptom is a tic or wheeze in the breath, and the finch version of coughs and sneezes. They will also lose their voices, and in later stages will have a nasal discharge. Gouldians are the most susceptible of the pet finches. The outbreak can be treated with a prescribed insecticide. 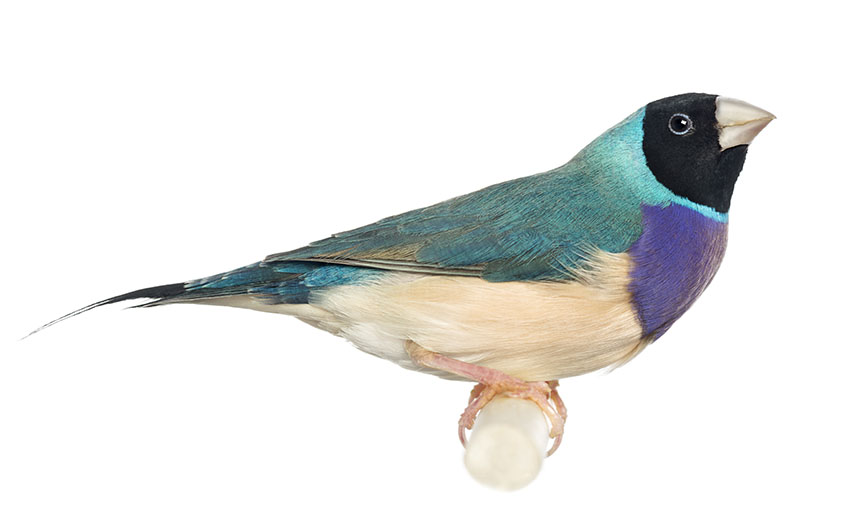 This is caused by coccidia - single-celled organisms infest a bird’s internal organs. Atoxoplasma usually strikes in early life (between two and nine months is the danger zone). The parasites spread swiftly, and death results in 80% of infected birds. The symptoms are lethargy, ruffled feathers, loose droppings, no appetite, and a growing blue spot visible through the abdomen wall – the sign of a swollen liver. It can be treated with antibiotics, but the chances of recovery are slim.

These bacteria are spread in aviaries by wild bird droppings, contaminating the finches’ food and water. Some pet finches – Bengalese, for example – harbour the bacteria without catching the disease themselves, but become carriers. Gouldian finches are very prone to falling sick with the bacteria. The symptoms of contamination are lethargy, weight loss, and yellow-tinged, dry droppings containing undigested seed. If fledglings catch it, they are unlikely to survive. Adult birds usually pull through with antibiotics.

Another coccidia problem, this one infecting the guts. The finch will have loose droppings and a messy vent. It will also be fluffed up and lethargic. The infection spreads very easily to other birds via droppings, so you need to zap it as soon as possible with a prescribed antibiotic.

This is another microscopic coccidian parasite. The symptoms are panting, wheezing, coughing/sneezing and very loose droppings. Diamond Firetails are one of the most susceptible finches, and birds with the infection usually die. Your vet may or may not recommend a course of treatment involving medicine. Cage birds often pick up the parasites from wild birds, with the organism’s eggs passed on via droppings. Good cage hygiene is the best preventative measure. 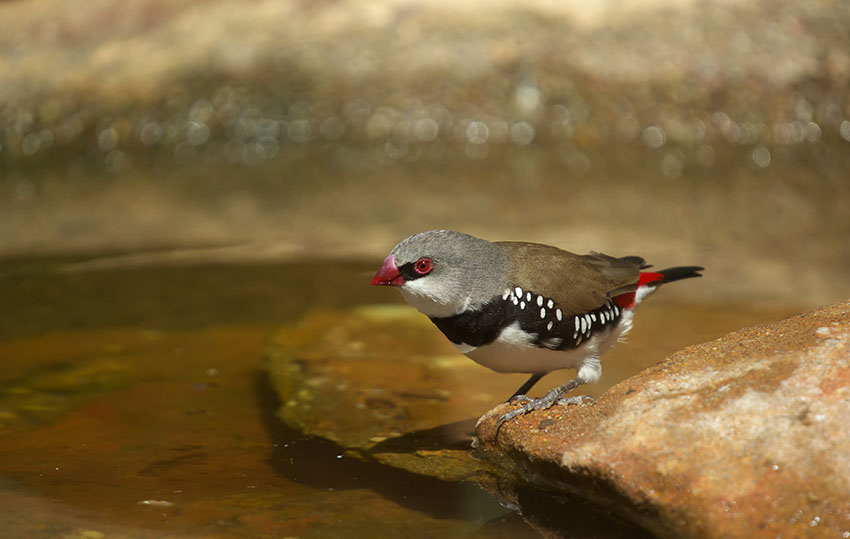 Infested birds become lethargic and fluff-up their feathers. A physical examination will soon reveal the culprits – blood-sucking red mites, usually nestling under the wings. The small, crusty wounds they leave are sometimes spotted before the mites themselves. Avian lice can cause similar problems. The birds will need to be treated with a mite/louse-killer such as moxidectin, and cages will need treating too – the parasites are tiny and can conceal themselves in nooks and crannies.

These conditions are caused by mites burrowing into the bird’s feathers or legs and laying eggs. The visible symptoms are scaly encrustations on the infected areas. If left untreated the condition is fatal. The mites can usually be treated with paraffin oil, but you should seek veterinary advice first.

This is spread by a parasite passed to birds via cat faeces, and can infect finches that have eaten contaminated wild grass seed. Infected birds (or any other animal – toxoplasmosis is not fussy) are colonised by tiny protozoan parasites, and if the bird survives the first attack it will, sadly, go blind a few weeks later. Vets are able to treat the infection if it’s caught in the early stages.

There are many types of these parasites – tapeworm, threadworm, caecal worm, roundworm, gape worm and gizzard worm being the commonest. They are transmitted via worm eggs in food, water, and live foods. Wild birds are often the carriers in aviaries. It’s never good news when your birds suffer an infestation, but at least the symptoms are unmistakable, as the worms will be visible in the droppings. They may also appear in the poor bird’s mouth. The worms will steal the bird’s nutrients, and the host will quickly weaken and die unless the parasites are zapped. They can be treated with specialist wormer products.

I have 2 female 6 year old finches in separate large cages placed fairly close together. In the past few weeks one seemed weak and lethargic.I started adding spinach and veterinary finch diet plus vitamins and probiotics and noticed she became stronger and appetite improved but now is seeming agitated and fluffing feathers a lot. Droppings look fine .Im now increasing the amount of hours of light and placed a small humidifier in the room.Just today I began adding Doxycycline to water. Her feathers appear in a little bit of poor condition .Is there anything I may have missed .Oh I'm also adding milk thistle as of a week ago and yesterday started Polymva Is there anything more that I can do???What could be making her sick when the other bird is fine??

Hello there, When my baby gouldian mutations come out of the nest they die shortly after. The parents feed them as normal, they have a clean and healthy environment and it’s frustrating and upsetting to see them die, it’s been happening every year for a few years now. Do you have any suggestions as to what might be wrong and how I can stop this happening?

my owl finch kids is not well and having issue with breathing not eating fine. please help