Although nothing should go wrong with your wormery if you follow the guidelines set out in Worm care section, the following FAQ section is here to help you should you need it. Do I have to get a worm sitter if I go on holiday?
No. Your worms will be OK tending to themselves for at least a month if you are going on holiday. They will happily eke out a living from the last food you gave them- just make sure it's a bumper dose. Make sure they are in a place which will keep them above freezing in the winter or out of direct sun in the summer. 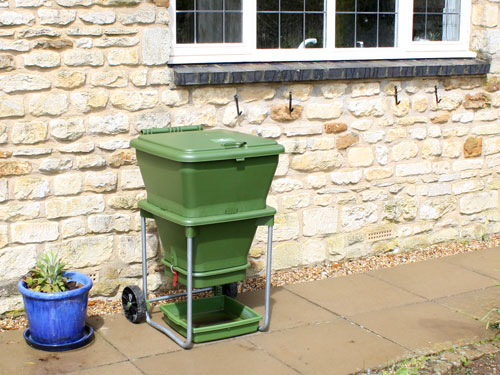 No need for a worm sitter when you go away!

What should my wormery look like?
Everything but the recent additions should look a bit brown and squishy but not black and mushy. Mould may grow on the contents and this can look anything like a grey beard to a white fluff- it's all quite normal. You shouldn't see many worms, as when you open the lid they should hurry to get out of the light. If they don't then something is out of balance. Check that you are not adding a lot more food to the wormery than usual and check that you have been adding your papery waste regularly. The best solution is to try mixing in lots of scrunched up newspaper with the mushy layers, stirring with a long stick. Sprinkle half a mug full of water over the surface of the mixed contents and leave without feeding for a week. What should my wormery smell like?
Your wormery should smell like a forest floor - the damp leafy type smell you get when you are walking through a wood, if it doesn't then something is out of balance. What is bedding?
Bedding is a woody based material, such as newspaper, shredded printing paper, peat moss, coir-coconut fibre or wood shavings. It is what your worms are delivered in and it's what they like to live in when they are not eating. Worms don't like to live in the rotting food and they also don't like living in their old poo. This is why it is important to keep up your additions of kitchen roll and shredded cardboard etc, so they always have a sanctuary to crawl to. What do I do if my kitchen caddy is suddenly overflowing?
In times of increased food waste, such as Christmas, keep an eye on the waste in your kitchen caddy and make sure that the worms don't get suddenly get overloaded with old mince pies and sprout leaves- they won't be able to deal with it all. It will start to turn to a smelly mush and will ruin the delicate balance your worms have built up over time. You could feed these extras to your chickens. What do I do if everything looks all black and mushy and isn't composting?
This would indicate that perhaps you have had an abnormal amount of scraps to give to your worms recently and they are struggling to keep up. Otherwise it could would be worth checking the wormery temperature, as it could also indicate that the wormery conditions are out of the 15-25° temperature range and the worms have gone into hibernation mode. If this is the case then they wouldn't be eating much. If the temperature isn't ideal then it would be best to move them to an area which is better suited to them. It could also mean that the moisture level is too high. 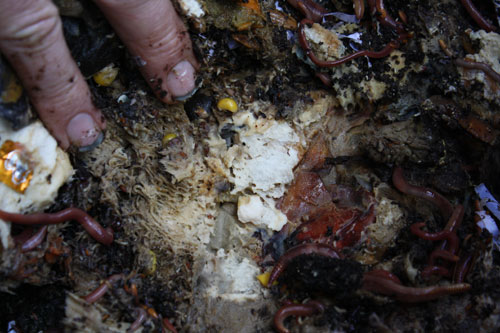 Too much food can lead to an unhealthy Hungry Bin!

What do I do if the moisture level in my wormery is too high?
The quick fix is to place loads of sheets of newspaper over the surface of the wormery to soak up some of the excess moisture. This could tend to just dry up the surface layers without effecting underneath, so a more effective solution is to scrunch up lots of newspaper and mix this in with the contents stirring with a large pole. Leave the wormery for a week to regain balance and then resume feeding. What if the wormery is too dry?
Add some water until you achieve the right moisture level, which is just a few drops of water coming out when you squeeze a handfull of their bedding. What if there are lots of small flies in my wormery?
These will be fruit flies. They are harmless, but unfortunately they like all the same foods that your worms like. They best ways of dealing with them are to:
a) Keep a lid on your kitchen caddy and empty it into your wormery more often, so they don't get a chance to breed in the food.
b) Loosely wrap up your scraps in newspaper before putting them in the wormery. The flies have to lay their eggs in rotting vegetable matter and will be put off by the newspaper. Your wormery may need extra water to compensate for the dry paper, but the worms will like the added bedding material. 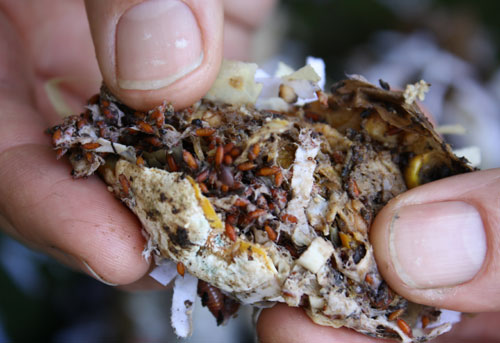 Wow :) This is an incredible collection of ideas! Waiting for more helpful pieces. You would amazing to read a similar one here- Batterymodeon

The liquid that drains from my worm farm has hundreds of tiny white things(?) floating on the surface. Any idea what this may be?

Hi there We are in Sydney. We seem to have a happy farm but I’ve never harvested casings in over a year. After heavy rains I’ve have to drain out the bottom level. Generally there is ample moisture in the farm. I gets a couple of hours of direct sunlight per day. We top farm up once a fortnight with a 6 litre container of scraps. But no casings are stopping down. Puzzled. Matt

Have just recieved my first supply of worms and added them to my wormery. How long do I wait before feeding and is it a good idea to add food that has started to rot down or should I only add fresh food such as chopped up fruit and veg etc?