The birds and the bees

The colony population expands and contracts with the season. A typical colony will build up its population using the nectar of the early flowers in spring. Then with a large workforce, it can harvest the higher quality nectar in the summer, which it will store over winter.

Population Growth
You can see the bee colony size in the diagram below: 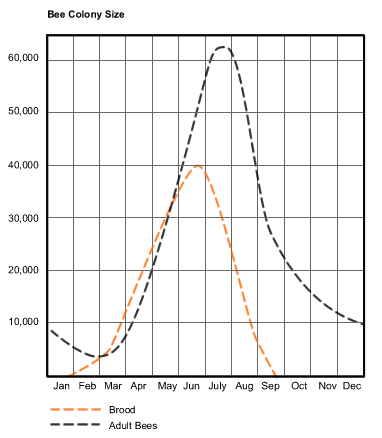 From March onwards, the colony is dedicated to the development of the brood and the queen increases her egg laying rapidly, peaking around June. The ratios of adult bees to brood at this time is around 2 to 1. The amount of food that is required by the colony will, at this point, remain static and the bees will be intensively storing nectar.

Temperature Control
The temperature of the brood is critical and must be kept within the range of 32-36degC. They do this by either fanning their wings to cool the hive or by metabolizing honey to heat it. The brood also produces heat as the larvae and pupae grow.

Bee eggs are parthenogenetic which means they will hatch even if not fertilized and this is the deciding factor as to whether the egg will hatch a male or female bee. Unfertilised eggs will produce males, known as drones. Fertilised eggs will produce females, which will be either workers or queens depending on how they are fed by the workers. There are no queen eggs or worker eggs, they are exactly the same; the difference occurs in how they are fed when they hatch.

The queen measures the cell size with her front legs and either adds sperm to fertilise the egg in her vagina ( if it's a queen or worker cell) or simply lays an unfertilised egg (if its a drone cell). When the egg hatches into larvae, it looks like a little maggot and the nurse bees start to feed it.

The nurse bees feed the larvae with bee milk. This is masticated pollen and is an extremely nutritious food, the cell is regularly topped up for the first three days, thereafter it is fed less frequently until the cell is capped.

The queen cell is fed bee milk with a higher sugar content than worker larvae. This super beemilk is called Royal Jelly and the queen larvae are fed as much of this as possible until the cell is capped. This difference produces a strong queen with properly developed ovaries.

Drones are thought to be fed a similar ration to the workers. Incidentally the cell caps are a mixture of pollen and wax which is breathable.